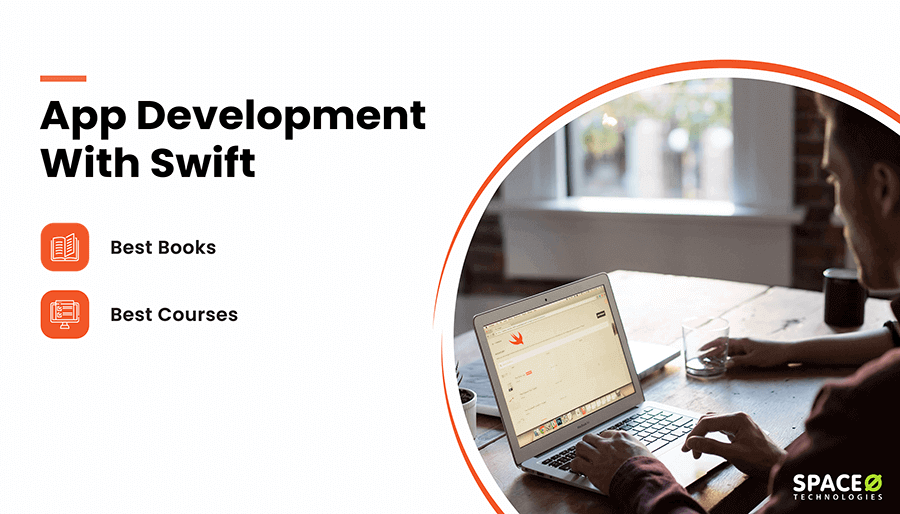 Most iOS developers use Swift to develop iOS applications. It is one of the most popular programming languages used by professional developers and has a huge demand in the job market.

Therefore, it has been observed that people want to learn app development with Swift. But it becomes challenging for them when it comes to finding the best books and courses to learn.

If you aspire to be a Swift developer and want to make a career in the mobile app development service field, then you must check this blog. We have shared a list of the best books and courses that you need to embark on your career. Let’s start!

Intro to App Development with Swift

Swift is a powerful programming language developed by Apple in July 2010 for macOS, iOS, watchOS, tvOS, and beyond. The language has made it easier for developers to develop apps for iPhones, iPad, Apple TV, and Apple Watch.

Here are some of the best features of Swift that you must know:

Without further ado, let’s check the best books and courses to learn Swift so that you can start developing apps.

Before you move ahead, check this table to find the important details of the courses. This table will help to make an easy decision. Moreover, ensure which course will best suit your requirements.

The Intro to iOS App Development with Swift will help you to build an app that records a conversation between 2 people. Later, it modulates the voice to sound like a Chipmunk or Darth Vader.

This course is all about the introduction of iOS application development with the Swift programming language from Apple. Moreover, it will help you to get into the iOS Developer Nanodegree.

Later, you can join the iOS Developer Nanodegree course to make your career in web and app development, machine learning, and data science.

The iOS App Development with Swift Specialization will cover all the fundamental points of Swift. You will get familiar with the development tools, such as XCode, design interface, and interactions.

Learn to evaluate the usability, and integrate camera, photo, and the information of the location to enhance the features of the app.

In the final stage of this course, you will be able to create a fully-functioning photo editing app for iPhone, iPad, and Apple Watch.

edX – Learn How to Design and Build iOS Apps

The Learn How to Design and Build iOS Apps course is designed to help you learn various tools, techniques, and concepts that are required to build a basic iOS application from scratch. 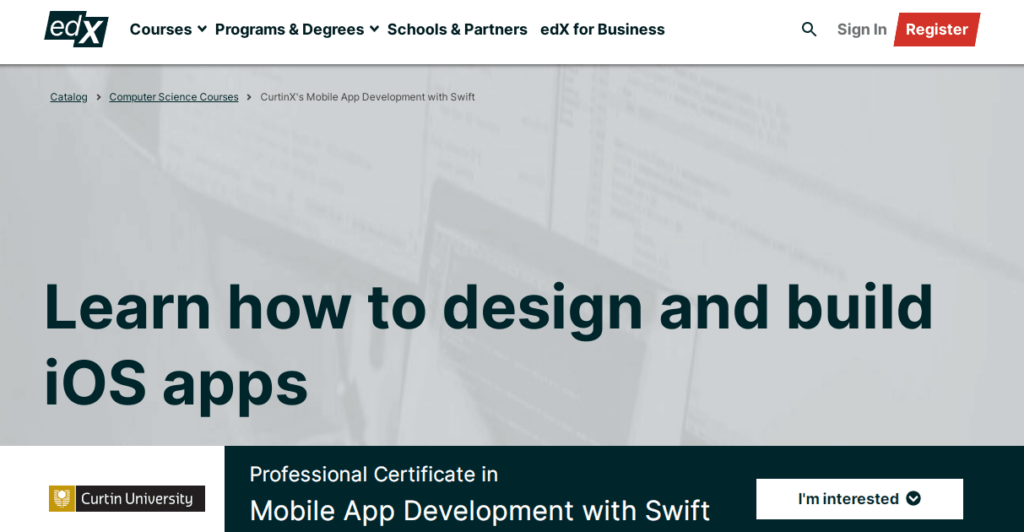 Starting from the Swift programming language to the utilization of the iOS Software Development Kit (SDK) and various tools, such as Xcode, debugger, analyzer, and iOS Simulator, you will learn everything to create mobile apps.

Through various lessons of this course, focus on Swift programming and different aspects of mobile app development. You will get practical and hands-on skills to enhance your app development career with an iOS app developer certification.

Developing iOS 10 Apps with Swift is the free course offered by Stanford’s School of Engineering, which specially focuses on building applications for the iPhone and iPad platforms using the iOS SDK. 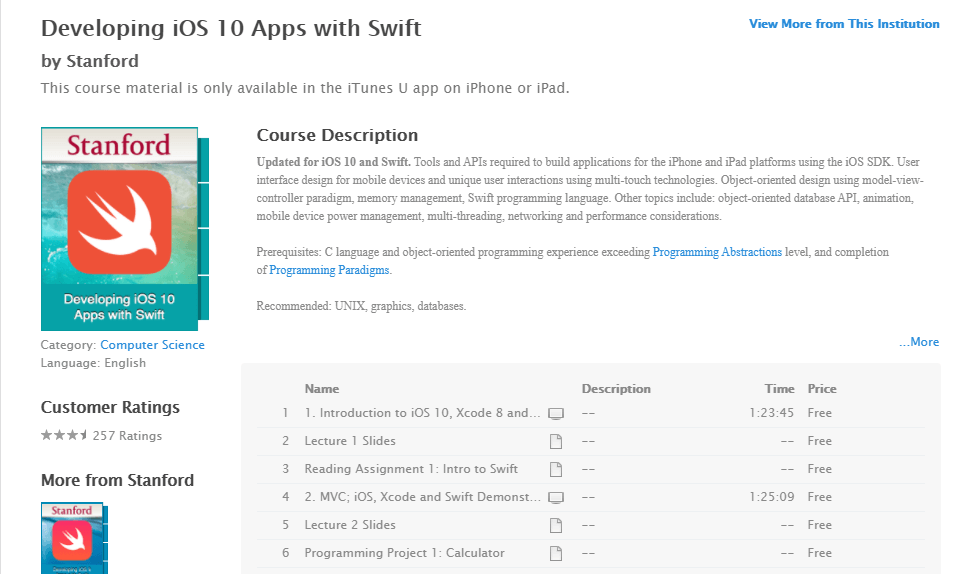 This course will give the introduction to Swift and various topics, such as interface design for mobile devices and unique user interactions by multi-touch technologies.

You will also cover the following topics through 49 lessons, and the majority of them are in a video format.

Offered By: Stanford’s School of Engineering

Create Your Own iOS App

Want to validate your app idea? Want to get a free consultation from an iOS expert?

This App Development with Swift book is for those who have an interest in enhancing their skills to develop their own iOS app. One can learn how to implement ideas to bring them to life and become a successful mobile application developer. 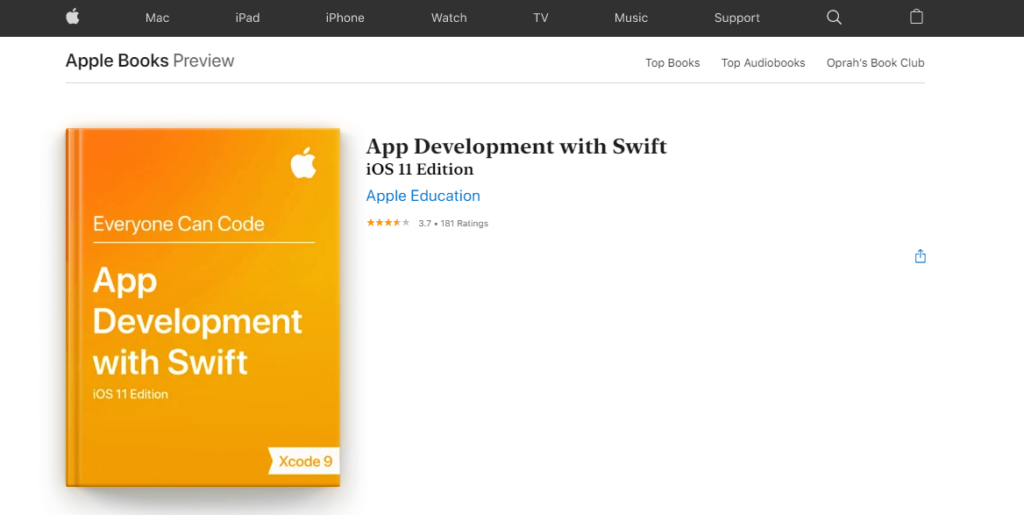 Moreover, this book is helpful for everyone, even if you are a complete newbie or want to expand your skill sets. After the completion of this book, users will be able to develop a fully functioning app.

Unit 1 starts by introducing iOS development tools and basic concepts using Swift as the language. Get industry best practices by following a step-by-step curriculum and learn to create applications from scratch.

This Beginner’s Guide to iOS 11 App Development Using Swift 4 book is for beginners who have no experience in mobile app development. The book helps you to learn the installation of the required programming environment and setting up the simulators.

You can learn to develop simple apps with a step-by-step process. Moreover, you will learn the basics of the Swift 4 programming language with some practical examples, screenshots, and code snippets.

Every code line is explained clearly in this book with all the instructions to develop apps. If you follow all the processes to develop the apps, you can also learn to design interfaces, connecting interface objects to code, developing efficient Swift code, and testing the app in simulators and real devices.

Here are some of the apps developed which are included in this book that you can refer to:

After curating the list of best books and courses for app development with Swift, we have also answered the most common questions that readers ask. Let’s check.

Want to get a free consultation from an iOS expert?

How to find the best iOS app development courses?

What are other books for app development with Swift?

Now you know the best books and courses for developing an app in Swift, it’s time to start developing your own iOS apps.

In case you need more information on developing Swift apps, then contact our team of Swift developers who will help you further.