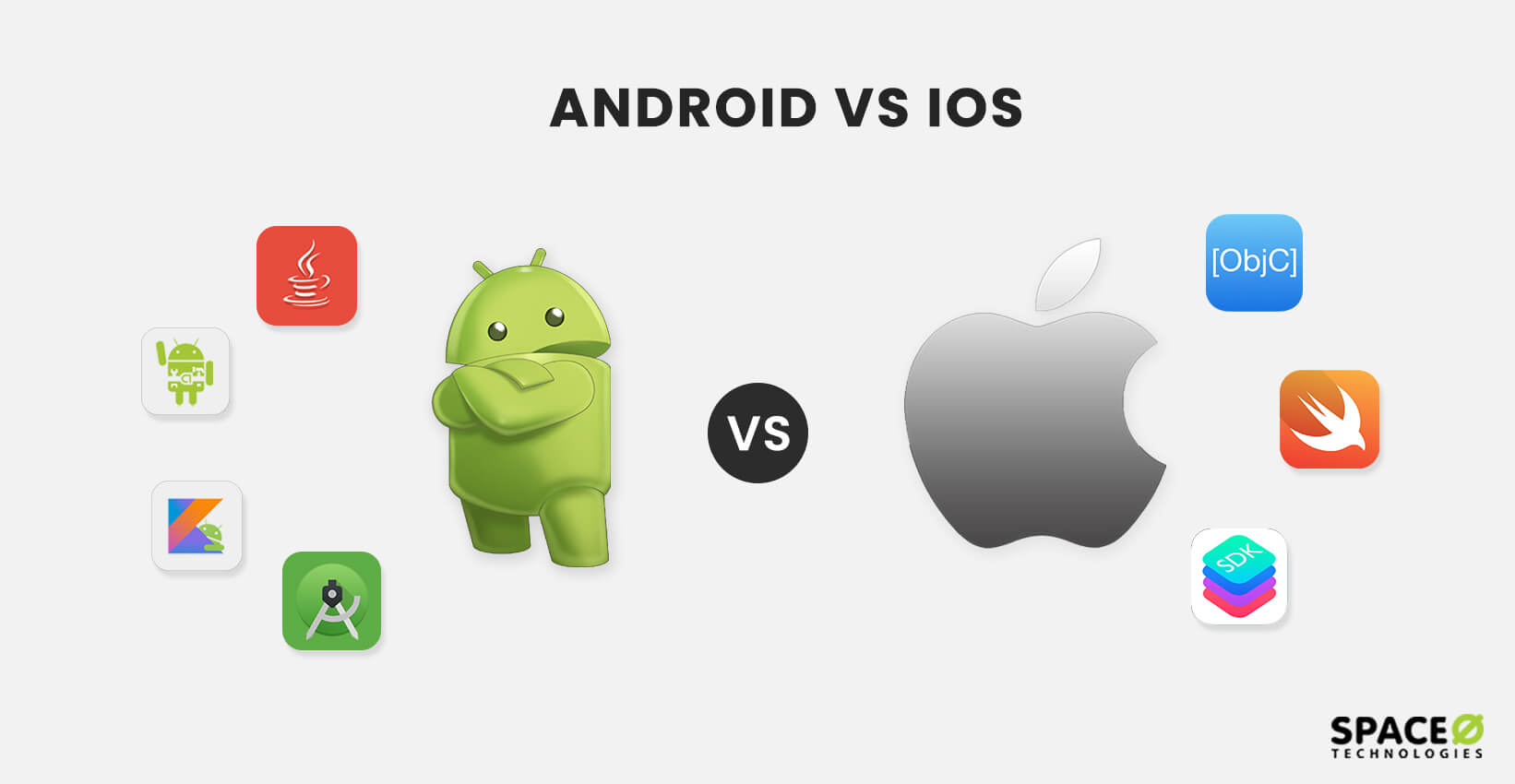 Should you develop an app for the iOS platform or Android or for both? We know that this is one of the first questions you think about before developing an app. A lot of our clients have the same doubt when they come to us with their project idea- “Should I hire an Android and iOS developer for my project?”. We discuss their requirement and business goals, market share of iOS and Android OS and come up with a proper plan for their needs.

Having developed over 3500 apps for both Android and iOS platforms, we have garnered knowledge and information about Android and iOS development. In this blog, we’ll discuss all the important aspects that you need to consider before you make your decision about selecting the right OS.

Who hasn’t heard about the rivalry between Android and iOS? Owned by technological goliaths Google and Apple, the debate of Android vs iOS has been there since the concept of these operating systems was born.

iOS and Android app development have almost nothing in common, it’s almost like they’re from different worlds. If we start talking about their differences, it would take a little longer than you’d like. So, we did the next best thing. We have noted down all the major differences that you need to know before you build your own app.

Do you have a great app idea but don’t know what to do next? I have 10+ years of experience in the app development industry.

Let’s begin with the most important one- differences in development processes. 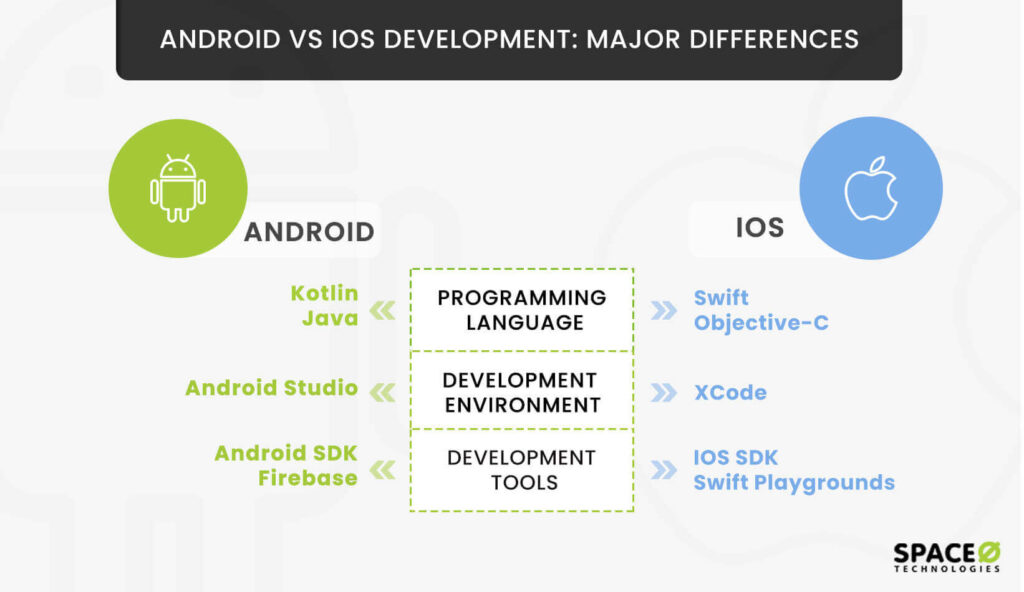 The first and foremost difference that comes into play during development is the language used to code in Android and iOS development. Developing an app on Android relies heavily on Java or Kotlin. Java used to be the main language but has been recently replaced by Kotlin because of its better features. You can learn more about the differences between Kotlin and Java if you need to.

When it comes to iOS app development, developers use Objective-C as the main programming or coding language. Recently iOS developers have started using Swift. Swift is becoming more and more popular because of the release of Swift 5 and its features.

Most developers find developing using Objective-C easier than Kotlin or Java. Even Swift requires a smaller learning curve than Java. However, Kotlin is developing at a tremendous pace making it the first choice of developers to develop apps. Kotlin is intuitive, modern, and easy to read.

After coding language, the next important difference for Android vs iOS development is in the Integrated Development Environment (IDE).

Android developers initially used to use Eclipse, a third party development utility created by IBM codebase because native tools were not available. This also made development fairly difficult. This changed in 2013 when Google released Android Studio. It is a proprietary tool that has an expanded range of features for Android app development.

There are various development and debugging features along with cross-platform support and high readability.

iOS developers have had access to the proprietary tool called XCode. The tool is easy to use and learn. This solution has a range of bug-fixing tools and also supports the entire range of iOS devices and screen sizes- from iPhones, iPads, and also macOS apps.

As opposed to Objective-C and Swift, XCode is not really favored by the developers. In fact, developers prefer Android Studio over XCode in terms of many factors. iOS/ Android Developers have talked about the issues of Xcode like instability, time-consuming refactoring, and inability to run a few simulators simultaneously.

Another issue is that there are gaps in the documentation. The information is spread across the web and you’ll have to search for many features and how to use them. On the other hand, Android Studio has extensive documentation. Apart from that, it also stable and time-effective. Don’t get the wrong idea about Xcode, the layout builders in Xcode are superior and enjoyable to use, and it also has a wider range of available features.

However, if we consider all the things, Android Studio wins when it comes to IDE.

Lastly, we’ll talk about development tools for Android vs iOS development. Both of these platforms have an extensive set of tools that are used by developers to create a mobile app.

Development and design are closely related to each other. Different development process leads to various system-specific designs. The same app is different visually in Android and iOS version.

The interaction and style of both these OS’s are unique and are heavily influenced by the culture of the two big companies that created them. You are advised to hire app designers who understand both the OS and understand what kind of UI and UX do the users expect from a certain app.

The major difference in design when it comes to Android and iOS is in the navigation and architecture organization.

The coder or developer break the app down to fragment and activities and develop using the partition method. An activity means one app screen fragments. If the project has multiple screens, the developer will have to manage dozens of activities. The fragments or parts of a user interface are often used to navigate between activities like entering a value, opening a new app screen.

The developer manages the controllers in several ways. The developer writes them in code or organizes images in something called a storyboard. This is saved as an XML file. This helps in increasing the development pace but also decreases the risk of errors.

How Much Does it Cost to Hire Android and iOS Developers?

The cost to hire a developer is different for every agency or freelance developer. Developers usually charge a fee on and per hour basis for their services. You may find a developer for as little as $20 per hour and even more than $250 per hour.

In terms of cost in iOS developer vs Android developer, iOS developers charge higher than Android platform developers. However, being a leading app development agency in India we have the skills of international caliber and we charge around $35 per hour of our services, whether iOS or Android. This includes project management, designing, testing, and publishing the app as well.

We have a list of countries and their average cost to hire an app developer (hourly rate).

Which One is Best for Your Requirement?

In Android vs iOS development, the main question arises about which platform should you go for. This totally depends on your needs and target audience. If you are developing an app and you want to focus on a wide range then you should develop both versions and develop iOS and Android apps. While if you have a specific audience that uses the iPhone devices then you should develop an iOS app. You can also first develop an iOS app and then expand to the Android platform.

Here, the point is that you need to understand the market share and demographics.

The Android OS holds dominance when it comes to market share. You can see in the graph below that Android holds 87% of the market share in the operating system market. This is also an upward trend and it is going to increase at lease until 2023. 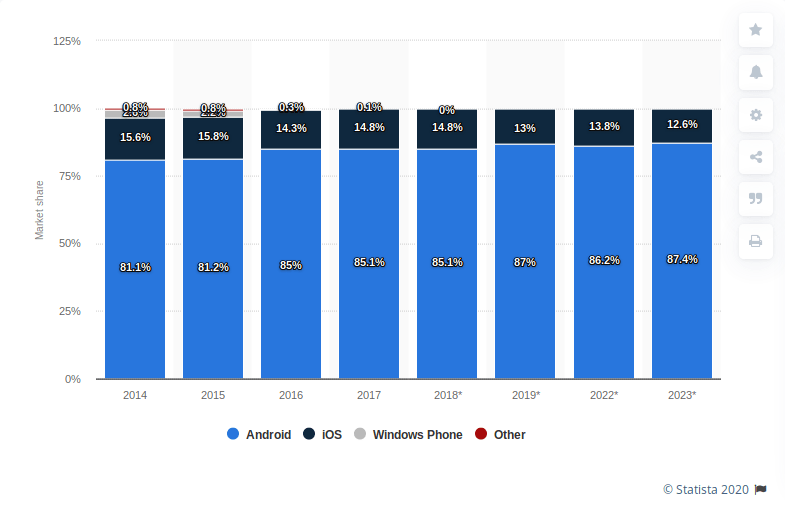 However, Android apps are more popular in developing nations and upcoming markets like Asia, Africa, and Latin America. iOS apps best for the rich, younger target groups in Western Europe, Australia, and North America. When you think of Android vs iOS Development, apart from market share you need to see the spending power of the audience.

Android users do not spend money in the Play Store, but you can have access to more people and can earn form mobile ads and other app monetization strategies. On the other hand, if you concentrate more on the iOS platform then you can expect more app purchases and more in-app purchases.

Let’s see some frequently asked questions and their answers

How much does it cost to put an app on the app store?

We will talk about the AppStore as well as Google Play Store. The charge of getting a developer account approved to launch an iOS app is $99 per year. Further, the AppStore transaction fee is 15 percent for every purchase or apps price.

Which is better iOS or Android?

Android apps have more flexibility, functionality, and freedom of choice vs iOS apps. iOS apps are less time consuming to create and have a loyal fan-base attached to it. In the end, it is you who decides if you want just one or both iOS and Android development.

The debate of Android vs iOS development is ongoing and will probably never end. Each platform has a unique set of pros and cons attached to them. You can check out the features of the latest version of iOS 13 and Android 10 and learn more about it.

If you have any questions or doubts regarding the app development process, cost, timeline, or anything related to mobile apps, feel free to contact us. We have developed many successful apps that run on Android and well as iOS platforms like Photo Translator and PayNowlink. If you want to hire Android app developers to create an Android app or iOS programmers to create an iPhone app, we can assist you.