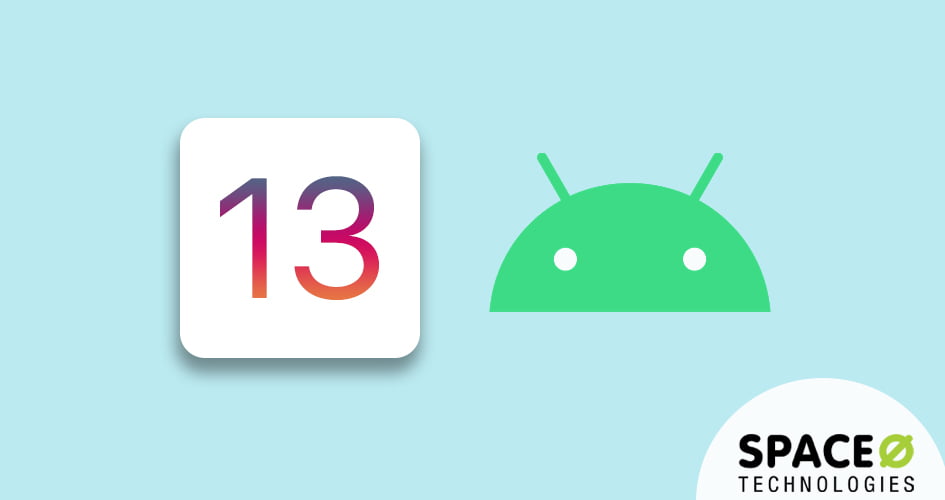 With the launch of Android 10 and iOS 13, you might want to which OS is more powerful and has advanced features for users. Right? Herein we have written a dedicated blog on Android vs. iOS 13 and compared the features of both operating systems. So, let’s get started and give the developer’s perspective on who’s slaying it and how.

The Google-Apple rivalry has never been a covert affair. Every time new announcements are made, the conspicuous cold war becomes a hot topic and talk of every town, literally.

Both have always been subjected to comparison especially after such announcements. And why not? These tech giants keep improving in order to get ahead of the other. Recently, Apple announced the launch of iOS 13 and Google announced Android 10 (no desserts this time).

Developers and tech-savvy people from all around the world went into a technological frenzy. Everyone started to talk about the new features and updates in these new OS’s. A comparison was the next natural thing.

Even tech geeks like us couldn’t keep our hands off the sizzling topic and decided to have a face-off between these newest operating systems. But what are the key differences between the two new operating systems? And what are the most significant changes that will matter to iOS and Android developers? In this blog, we will be discussing some of the features of iOS 13 and Android 10.

Mind well, this blog doesn’t comprise of all the new features, but the features and new updates in both the operating systems that can be compared and contrasted.

Both Apple and Google tout their OS’s to be the best. The war has been going on since a time that can’t even be traced back. Probably, the rivalry has been there since the conception of these two huge ideas. There are certain aspects where Android is the deniable winner like when it comes to Maps and Home Assistant features.

On the other hand, iOS is the ruling king in the kingdom of Privacy and Dark Mode. There are pros and cons for every feature and they will keep on improving. So, if you still have any queries or confuse related to Android 10 vs. iOS 13 features, iOS or Android app development, get in touch with us as we are a leading mobile app development company with a dedicated team of Android and iOS app developers.

Well, we can’t say who wins this time. Instead of fighting, we should rather wait and watch. Let’s see what the future holds in the field of mobile technology.